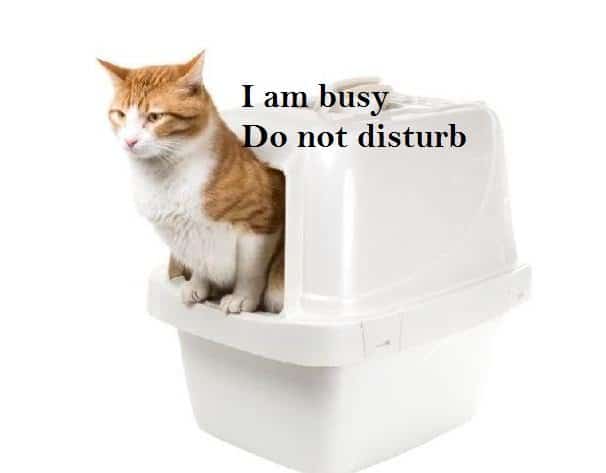 Diarrhea in Cats May Indicate Major Problems – Relatively common in the animal world, diarrhea in cats is a symptom that can manifest in pussies because of many different problems; and, therefore, it becomes a complication that deserves to be well investigated, since it can indicate the existence of some more serious disease.

Although not all cases of diarrhea in cats actually mean that there is a serious problem with the pussy, observing the symptoms and progression of the picture is always necessary – so when you notice this sign on your feline pet, make an appointment with a veterinary professional; so he can assess the health of the animal and exclude the possibility of more complicated pathologies.

Foodborne infection, presence of worms or parasites, bacteria, viruses and even dietary changes may end up triggering the onset of diarrhea and different diseases in cats, and as administering drugs to animals without the supervision of a professional can be extremely dangerous – and may even lead the animal to death – the investigation of the causes of this picture becomes even more important.

Some other signs combined with diarrhea in felines can also be good indicators of the presence of more serious diseases and it is therefore of great importance to always be alert to changes in behavior or disposition in your pet pussy when there is diarrhea – which may also occur due to feline inflammatory bowel disease (a condition caused by complications in the animal’s digestive tract).

In order for your cat to be treated correctly and not to develop even more problems due to the lack of attention to its symptoms, check below some of the main causes of diarrhea in cats, as well as the most common forms of treatment and prevention of this cat. type of complication:

Main causes of diarrhea in cats

As discussed in the introduction to this article, feline diarrhea may be due to many different problems – as well as for common reasons that are not very worrisome – causing the attention of pet owners to be redoubled in identifying the symptoms; since taking immediate precautions can make all the difference between the life and death of the animal, as the case may be.

Here are some of the main causes of diarrhea in cats:

Curious and independent by nature, pussies love to wander around their homes to explore unfamiliar environments, and in many cases, these walks can make it easier for pussies to get ingested or spoiled food and can cause diarrhea. In addition to this type of spoiled food, human food can also cause diarrhea in cats; since they are not appropriate for the consumption feline like the rations and the snacks developed especially for them

In addition to eating inappropriate foods, it is also common for sudden changes in pet food to cause diarrhea – since the animal’s body, accustomed to a type of diet, is eventually harmed by significant changes in what the pussy eats (even if the new diet is made up of foods made especially for the feline world). Therefore, when thinking of changing your cat’s diet for any reason, consult a veterinarian; so that it can indicate the best way to make the necessary modifications without the animal going through complications like this.

Dangerous diseases caused by virus contamination can also, in most cases, be responsible for the onset of diarrhea in cats. Fearful and often fatal names in the world of cats such as Panleucopenia, Coronavirus, infection by Astroviruses, Rotavirus, FIV (Feline Immunodeficiency Virus, better known with AIDS Feline ), FeLV (Feline Leukemia Virus) and FIP Feline Infectious Peritonitis) can also lead to the occurrence of the problem.

Feline infection by bacteria such as salmonella, Campylobacter and Escherichia coli (one of the main responsible for feline urinary tract infections) can also trigger diarrhea in cats.

Worms such as roundworms, hookworms, giardia (which causes the appearance of greenish or yellowish stools in diarrhea), toxoplasma and coccidia, among others, are some of those that can cause diarrhea in cats; and since contamination by these worms may be responsible for developing dangerous diseases, it is necessary to investigate this type of occurrence quickly – since even the diagnosis made by veterinary professionals can be a little time-consuming (taking into account the fact that a good part of these parasites may not be clearly seen in the feces of the pussies – making it difficult to define the disease).

Ingestion and contact with toxic products also generate diarrhea in cats (in addition to vomiting, among other symptoms). Cleaning products, contact with substances used in detoxification processes, poisons and baits to kill insects, cockroaches or rats can be very dangerous for the pussies, causing their poisoning.

In addition, such product, the wrong use of drugs can also turn into a real poison for your feline, triggering a host of symptoms and complications – and be reminding pet owners of the importance of always consulting a veterinarian and never practicing pet medication on their own. One of the best-known poisons, popularly called “chumbinho”, also causes intense diarrhea and full of mucus.

Diarrhea with soft stools (with or without the presence of blood) combined with frequent vomiting forms a set of signs typical of feline inflammatory bowel disease. As there are no specific factors that cause the problem to appear in cats, this chronic disease is commonly found in pussies with high alimentary sensitivity – and is characterized by the deficiency of absorption and digestion of the nutrients ingested by the animal.

Although many do not know, the altered psychological state of felines can also cause diarrhea; and abrupt changes in the environment, solitude, and conviviality in places that make the animal stressed can be factors responsible for triggering the picture in the pussies.

As mentioned several times in this article, the cause of diarrhea in cats can be very varied and, in addition to the reasons explained above, it is also possible that this symptom appears due to problems such as kidney diseases, liver diseases, diabetes, intestinal obstructions, presence of hairballs or foreign objects that cause any type of blockage in the animal’s body, pancreatitis, fungal problems, cancers, toxins or intolerances and food allergies.

In many of the cases where the main motivation for feline diarrhea originates from other diseases, it is possible that the picture becomes chronic – creating greater and more concrete dangers for the life and health of the animal. To be defined as chronic, pussy diarrhea should last for more than ten days; is that, in the majority of the occurrences, the feces of this type of picture are characterized by the dark color and the presence of blood.

The Dangers of Diarrhea in Cats

Although in cases where diarrhea is not accompanied by any other symptom the case is probably not of great severity; it is necessary to be very attentive when the picture is accompanied by more signs or persists for prolonged periods – since, in this type of situation, the diarrhea is usually just another symptom developed due to a bigger problem and much more complicated.

As noted above, when noticing a set of dysfunctional signs in your pet pussy, it is necessary to refer you immediately to an appointment with a veterinarian, allowing him to make a more accurate diagnosis and a treatment to be started quickly and effectively.

In addition to the above-mentioned diseases and complications (which can be extremely dangerous and even fatal for cats), there is also the possibility that the animal may become dehydrated due to chronic diarrhea – since in these cases the animal usually loses hunger, getting look and apathetic behavior and obviously losing a lot of fluid with constant diarrhea.

Although not all cat owners know, dehydration is a very serious complication in the life of cats; and that it may even lead to death within a few hours (depending on the stage of dehydration that the problem has already generated) and – therefore, even if the signs of diarrhea are not combined with other symptoms, it is essential to have guidance of a professional to treat the problem, and it is worth remembering that the administration of remedies and remedies considered as ‘homemade’ is also not indicated and may bring new problems to the health of your feline instead of resolving what already existed.

Another important tip is that pet owners of pet cats should seek to interact with the main symptoms of diseases common to the world of cats – being able to identify the existence of some dysfunction more easily and, with that, treat the problem (logically, the supervision of a professional veterinarian) more quickly and effectively.

Previous post Are Olives Bad for Dogs? Can My Dog ​​Eat Olives?

Next post I Want to Buy a Kitten, What to do?
Close
Menu

How To Know What The Cat Wants

How to Brush a Cat’s Teeth

Do Cats Change the Color of Their Eyes?

What is Best Age to Neuter a Cat?

How Much Benadryl for a Cat

Coronavirus: Can My Dog or Cat Get it – and Pass it along to Me?