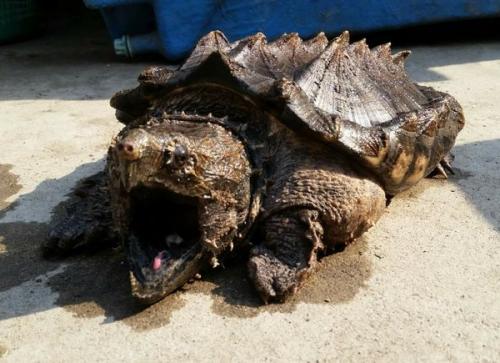 Alligator turtles are found in their natural habitats in parts of the southeastern United States. Rivers, swamps, and lakes can be home to turtles. An adult alligator turtle can be up to 30 inches (75 cm) long. Although alligator turtles have existed for 20 million years, they are currently a threatened species.

The average lifespan of an alligator turtle between 20 and 70 years, although some can live longer, reaching 100 years of age. If an alligator turtle escapes the dangers it faces as an egg and as a calf, and reaches adulthood, it has a good chance of living a long life.

Alligator turtles face the greatest threat from their natural predators, such as birds and raccoons, while being eggs and hatchlings. As adults, their only predator is the human being, and this creature\’s life expectancy is often affected by hunting. Alligator turtles are captured by humans to be sold as pets and for their shells and meat. Other threats include the use of pesticides and the destruction of their habitats.

The alligator tortoise is well adapted for survival in its natural habitat. She is an effective hunter; avoids being detected by prey such as fish, remaining virtually motionless underwater for up to 50 minutes. It attracts other prey, such as toads, showing its worm-like tongue and standing still. It has a very hard shell, covered in keels, that help it camouflage itself while hunting and provide a high level of protection to your body. Other defense mechanisms, such as its powerful bite and the ability to produce a bad odor substance, also contribute to its protection.

Alligator turtles begin to breed when they reach sexual maturity, between the ages of 11 and 13. After mating in the spring, the female turtle creates a nest by digging a hole in the ground and produces a litter of between eight and 52 eggs. Eggs are incubated for a period of between 70 and 107 days. Eggs that are incubated at a lower temperature produce male offspring, while those incubated at a higher temperature produce females. Alligator turtles usually wait a year before producing their next litter of eggs.

Previous post How to Care for a Mediterranean tortoise

Next post How to Raise a Baby Alligator Turtle

What Do I Need to House a Water Turtle at Home?